What do parts of the Southwest of Las Vegas and parts of Henderson have in common?  The Greater Las Vegas MLS areas 505 and 606 each enjoyed closing sales prices that were higher than the previous month!  Certainly one month does not a trend make, but it is encouraging – if not exhilirating – to see even a couple of areas behaving contrary to the overall market.  As you probably know, “the light at the end of the tunnel” has been turned off due to budget cuts – but perhaps that will change as well.

So lets download my February 2009 Greater Las Vegas Market Stats for Single Family Residences listed under one million dollars.  The first item to look at is the “Available Homes” count and notice that the inventory has dropped to  its lowest level in quite a while.  Another item to view is the Average CDOM for each MLS area.  You will see some high CDOM numbers for some MLS areas; this is a reflection of the fact that we are seeing some of the older listings finally moving through the system.  Along those same lines approximately one third of all closings in February closed with an average 60 day CDOM; the remaining two thirds closed with ad average 220 day CDOM.

Market activity and closed units remain strong despite the fact that the average closed sales price has dropped 35% in the past twelve months.  That then begs the question of how effective the American Recovery and Reinvestment Act will be for Southern Nevada!  The following graphic is startling! 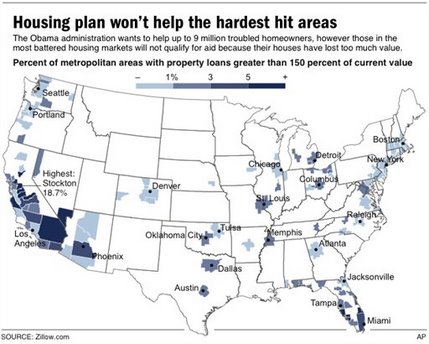 So, will Fiat replace GM on the Big Board of the New York Stock Exchange?  Will the Cannabis become the new state flower of California?  And if California fails to legalize marijuana in an effort to save their economy, will the State of California end on on eBay for sale?

Stay tuned . . . we are certainly living in interesting times . . . and the remainder of 2009 should be better than any daytime or nighttime soap opera!