First, there are 257 Assembly Bills and another 238 Senate Bills that are posted on the Nevada Legislature website.  AB-235 (Click Here) was introduced last week and enacts the Uniform Commercial Real Estate Receivership Act. (BDR 3-714).  To keep up to date with Legislative activity in Carson City, click on the link below.

February 2017 Single Family Residential (SFR) closed sales were up 4.6% from January, but we are beginning 2017 with a 11.2% increase in closed sales over 2016.  The median closed sales price of a SFR improved 0.84% to $240,000 while the average closed sales price of an SFR also increased by 1.8% at $276,713. February saw more activity and closings than January.  SFR Months of Inventory is 2.8 months at present, but condo and townhome inventory has fallen to 1.5 months.

The charts below  are an attempt to get a better handle on the current over pricing situation.  The charts look at a rolling 12 month average of original listing prices and compares that to a rolling 12 months of closings.  It only include SFR data for properties that had an original list price between $250K – $1M in an effort to avoid any skewing from the high end listings (over $1M).   The CON/TWN chart includes data for properties has had an original list price below $1M.  The rolling 12 month averages provide a smoother trend line than using actual monthly numbers.  It looks like we were getting the over pricing under control in the latter part of 2013 and early 2014, but since then the over pricing gap has increased with the average amount of over pricing per SFR being approximately $39,000.

Currently 61% of all available SFR listings have been on the market for over 30 days, 52% over 45 days, and 47% over 60 days.  That’s remarkable given there is only 2 to 3 months of available inventory, but with 61% over priced – there is only about 4 weeks of marketable inventory. 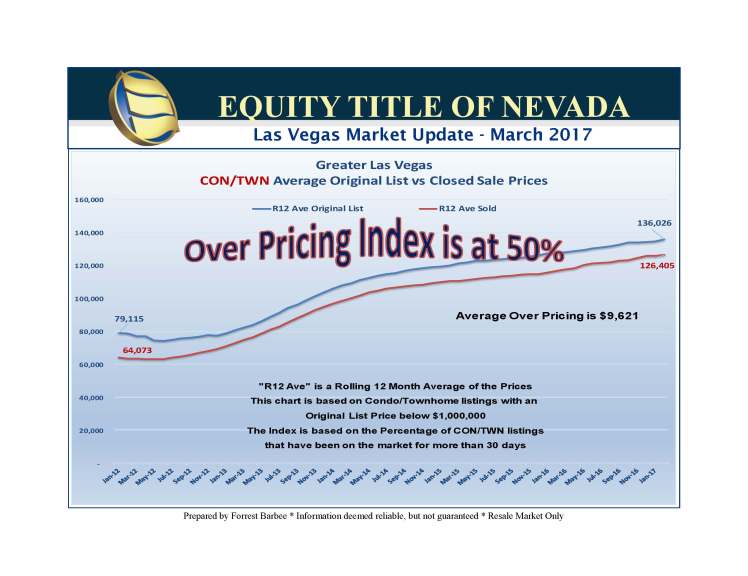 Where Were the Sales?

The chart below clearly illustrates that closed sales were not consistent across Greater Las Vegas this past month.  For example, Spring Valley, Anthem Country Club, and Providence faced decreases in closed sales – even as Aliante, Summerlin, and Mountain’s edge saw improvement.  Therefore, depending on the community, months of inventory for SFR homes ranges from 2 to 8 months.  It’s also clear that some communities had very short average days on the market (most notably Silverado Ranch and Peccole Ranch), while others such as Anthem Country Club and Siena were just over 100 days average on the market.  Some of that also suggests that some of the older inventory closed this past month.  That can also been seen by the drop in the average list price for available SFRs!